No more kidding around

Posted on July 9, 2011 by mygoatfarmgcsc

It never rains but it pours!

After a nice stretch of hot, sunny weather (except for Monday, the day the Duke & Duchess were in the neighbourhood) this afternoon it started raining. And just after it started raining, on the heels of Clover’s twins on Monday and Tansy’s boy yesterday, today the last kids of the season were born!

Nutmeg would be here to tell you about it herself but she’s resting. Poor dear, she had the longest labour (and the longest kids!!) of all of the Mamas! And these babies….. Big! Long! Fluffy! Cute!! (did I mention how big & long they are?)

They are, at birth, bigger than Athena & Diana, who are 5 days old now. Like Athena & Diane, they had names waiting for them, chosen by our Goat Soap Gazette subscribers over the past few months.

It is my great pleasure, as Head Goat, to introduce you to Nutmeg’s twin girls… 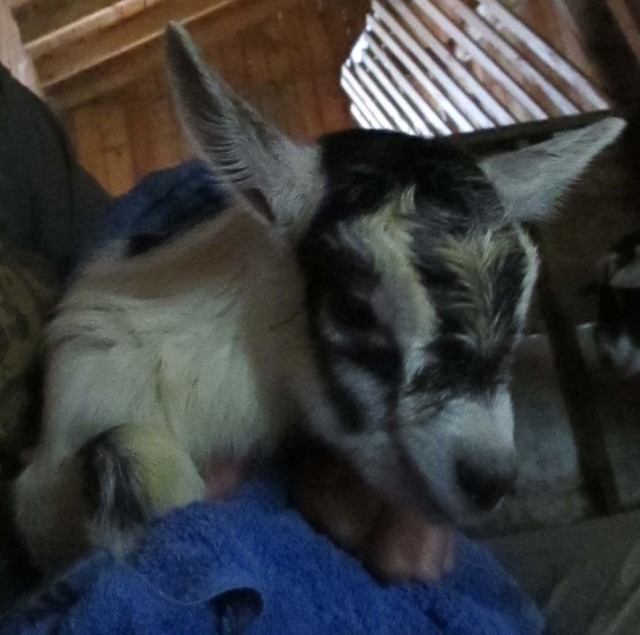 “Hera“
Hera is the Greek goddess of women and marriage

All the kids have names now except for Tansy’s boy. By this time tomorrow night his “48 hour name the kid contest” will be over and he’ll have a name too. I guess he’s your last chance to name a kid at The Great Canadian Soap Company this season so if you have a good name suggestion – a boy’s name that starts with the letter “D” – go let Tansy know before tomorrow (Sunday) 6pm Eastern time.

Here’s another of the boy’s videos, maybe it will help suggest a name to you…

The kids are growing up SO fast! You wouldn’t believe how big Mr. Bean is!! Early next week I’ll get you some updated pictures of them all and put their names all in one list. Were you keeping track? We have more girls than boys. One dad. Many moms. Some twins and some singles. Many ears.

Here’s Freyja & Hera’s first attempts at standing. They’ve just been put in with Athena & Diana but just look at the size of those older kids on the outside looking in!

This entry was posted in Uncategorized. Bookmark the permalink.